The centerpiece of the collection was built in 1907 by the Baldwin Locomotive Works in Philadelphia, PA for the Henry Cowell Lime and Cement Company of Cowell, CA. The locomotive, originally dubbed “Engine No. 3”, and its sister engines were used to haul rock from the company’s quarry to the crushing mill, a distance of three miles. In 1952, “No. 3” was sold to the South San Francisco Scrap Metals Company, where it was used to move other pieces of railroad equipment around the scrap yard.

In 1960, Charles Pollard of Vista, CA, bought “No. 3” and extensively modified its appearance to resemble much older steam engines of the 1870s. He operated the locomotive, then called the “Robert E. Lee,” on the grounds of his machine shop. When Pollard died in 1966, the locomotive and various other pieces of rolling stock and railroad equipment were purchased by John S. Porter of Poway. Porter built a small station, house and shed for the train and operated it on his land which today comprises part of our park. Mr. Porter died in 1980, ending the operation of his “Poway Village and Rattlesnake Creek Railroad.”

In December of 1987, the City of Poway purchased the Porter property – lock, stock and locomotive. The locomotive and its tender have been restored to full operational condition by the PMRRV. Restoration, certification and testing were completed early in 1997 and the locomotive made its inaugural PMRR passenger run on July 4, 1997. 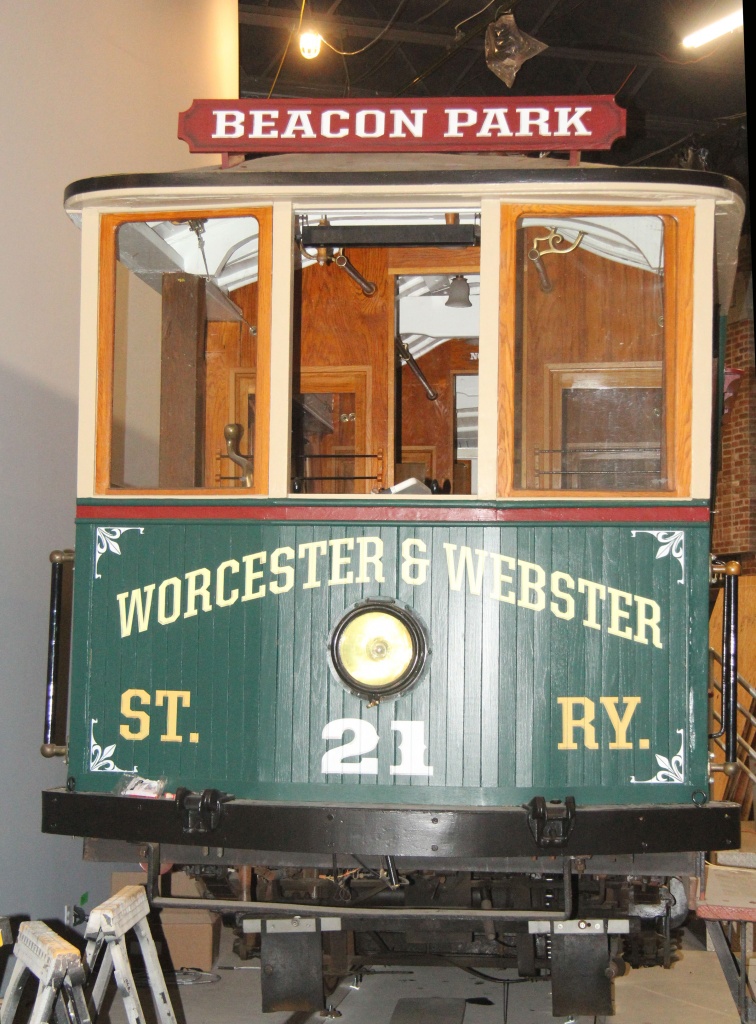 “Our trolley has had a long, unclear history as far as the Jim Walker and Frank Lorey research goes. The best guess is that portions of it (mostly the wheel truck frame) could go as far back as 1894. In that year, the Maguire Manufacturing Company of Chicago began building a number of open bench seat trolleys and frames for the Los Angeles Railway Co.

They had hand brakes, and ran on two General Electric 25-horsepower electric traction motors, mounted directly above each axle. Some unpowered frames were also sent to Los Angeles and the LA Rwy. shops finished them off as trailers in their own facilities. These small trolleys served the downtown Los Angeles area, but quickly became too small for the growing metropolis. By the late 1890’s, most had been removed from service. In 1912, many that survived, including ours, were modified to become material-hauling cars. Photos show that the interiors were removed, vestibule ends from other trolleys added, newer control stands added, and ours was documented as being renumbered as #9306. They hauled rails, spikes, bolts, and rubbish to and from worksites as Los Angeles grew. Most of these cars eventually wound up being scrapped. In 1926, #9306 was sold along with several others to Lasky Studios. The prop department remodeled three cars to “cable car” appearance for use in several movies. Lasky Studios became Paramount in 1928. Our trolley’s last known use as a “movie star” was in the 1969 film “Gaily, Gaily.” It sat on a back lot until 1977, when it was sold to a private collector.

Working back from the sale records showing ours to be #9306, and eliminating the trolleys that had been scrapped, our surviving trolley could only be number 54, one of the earliest surviving powered Los Angeles Railway cars. The order from Maguire was filled between 1894-1897, and it is unclear exactly when each trolley was placed in service by the LARY. Eventually, our trolley was sold to Dr. Richard May. By this time the electric portions were no longer functioning, and a Corvair engine and air brake system had been added. The fuel tank was a surplus hydraulic reservoir from a B-52 bomber. It sat collecting dust in a barn in Apple Valley, although it was said that he ran it on a few hundred feet of track on occasion. It was widely advertised for sale in 1992, and the PMRRV acquired it in early 1993.” (History by Frank Lorey)

(Notes: When the Trolley was acquired, its frame and motor were in fair condition, but the superstructure needed a lot of work and the wheels on the single 4-wheel truck had to be replaced. Extensive structural, mechanical and cosmetic restoration work was carried out by PMRR Volunteers over the following three years and the trolley became fully operational again in the Spring of 1996. Since that time, the trolley has operated as a reliable and regular member of the PMRR fleet and has become a firm favorite with members and visitors alike. It must be noted that today’s vehicle is not a true restoration of LARY Electric Trolley #54, (and bears the number “57”), since it still includes changes that were made during its service as LARY Materials Car #9306 and a movie studio prop. Safety features also were added by the PMRRV when performing their restoration work. Nevertheless, it serves as a representative example of late 19th century and early 20th century interurban mass transportation. It blends well with the 1907 Baldwin steam locomotive and passenger car and adds an important dimension to our collection.)

In 1952, ownership passed to the City of San Francisco when it acquired the California Street line as part of its new municipal cable car system. Rolling stock cutbacks occurred in 1955, at which time No. 17, then almost 50 years old, was sold to the Knott’s Berry Farm amusement park in Orange County, California, as one of a package of 6 cars.

After providing park visitors with rides for 33 years, the 6 cars were retired in 1988 and No. 17 was acquired by the City of San Diego, with the intention of operating it through the Gaslamp District. Those plans never came to fruition, and in 1997 the car was spotted decaying in the MTDB maintenance yard – which is how it eventually came to reside in our train barn.

Full cosmetic restoration and rework of the battery-electric drive system (PMRR has no continuous motion underground cable) has been performed by the Poway Midland Railroad Volunteers and the City of Poway. Once commissioning has been completed, it will enter regular passenger service.

The speeder was built in 1950 by the Fairmont Company of Fairmont, MN. It was among the railroad equipment purchased from the estate of John Porter in 1987. Speeder cars are used to transport work crews and their supplies down the track to work sites. When acquired by the City it was in very poor condition. It was the first piece of rolling stock to be restored and is an example of the terrific results we can achieve through hard work.

The four wood-sided gondola cars are used today for carrying passengers around the track behind the Fairmont speeder and behind the Locomotive. They were built in the 1880s for use in hauling a different cargo – rocks and ore from the mines. They are typical of the narrow gauge ore cars once used in mining operations throughout the West. Originally, the interiors of the cars were faced with sheet metal to prolong the useful life of the wooden planks forming the sides and ends. All of the wood was in such poor condition that it was replaced and seats were installed to carry passengers. Each car seats up to 12 passengers.

When Charles Pollard acquired the Baldwin locomotive he needed something for it to pull along his track. To solve the problem, he fabricated an 1870s style passenger coach from the wheels up. The coach was among the rolling stock purchased with the Locomotive by John Porter and eventually acquired by the City. The coach was constructed of plywood on a steel frame and was in very bad shape when it was rolled into the train barn for renovation. Dedicated members of the PMRRV stripped the wood from the frame and added more steel to form a clerestory to give the roof line a more elegant appearance consistent with the vintage of our steam locomotive. The coach has bench seating for up to 32 passengers and is the PMRR’s primary passenger vehicle. In 1999, it was repainted and given the name “Paquay Valley”, which is the old Native American name for the Poway Valley.

Beginning in the late 1800’s, handcars surfaced as an effective means to move on the rails without using expensive, full-size train equipment. Originally powered by a hand crank that spun a wheel to move the car, handcars were very useful in getting a small crew and some light equipment down the line to perform repairs and maintenance.

Generally, this crew of 4 to 6 (a “Section Gang”) were in charge of a section of track about 4 to 5 miles long. A typical handcar was loaded with a spike removal claw, spike maul, shovels, picks, rail cutting chisels, signal flags, water, oilcans and various small hand tools.

Unfortunately, as useful as they were, handcars were (and remain) quite dangerous to operate. It was not uncommon for fast-moving trains to come around a blind corner so quickly the handcar crews could not get out of the way in time to save themselves. In addition, handcars are very difficult to stand on when in motion at a given speed.

Thus beginning in 1910 or so, handcars were replaced with faster and safer gas-powered speeder cars very similar to the Fairmont Speeder featured here at the Poway-Midland Railroad.