In Poway, the 1880′s presented a prosperous and well-populated valley. Families were settling on farms, planting orchards and vineyards and raising grain. By 1887, there were approximately 800 people in the Poway area. The community during this period had a church, school, hotel, a general store and the expectation of at least two railroad lines coming through the valley. The railroad lines were to pass just west of the present-day Midland Road. 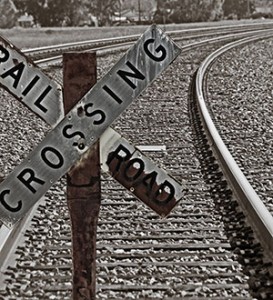 Expectations of the railroad set off a real estate boom and the Piermont Plan for a sub-division came into being. In 1887, developers Baird and Chapin laid out plans to develop a town in the area of today’s Old Poway Park, based on these expectations.

The railroad companies, the San Diego Central and the Southern Pacific, proposed a line from Poway to extend toward Ramona and Julian. But the plans failed to materialize due to the railway companies deciding on a lack of sufficient business and the unfeasibility of the valley’s terrain. This decision resulted in a real estate bust. Instead, a railway line was built from Escondido to Oceanside in 1887.

Railroad plans were brought up again in the late 1890′s. At this time Poway’s peaches and grapes had become an important crop well recognized throughout Southern California. Fruits were sun dried and sent to the Eastern part of the country. Interest in a railroad was renewed. The people in Poway held a town meeting in the I.O.G.T. Hall and put forth a new proposal which was again negated by railroad officials.

Interestingly enough, the proposed line was to terminate in the area of today’s Poway-Midland Railroad, according to Gus Kear’s “Memoirs of Early Poway”. He remembered that west of York Street, instead of the present alley, there was a 60-foot street named Irving Avenue running south of Aubrey to Windsor Street. On this street had been a reservation of land for a depot and railroad yards for the proposed railroad in the Piermont Plan.

In the 1960′s, railroad plans were resurrected by Col. John Porter on his property on Midland Road near Aubrey. He laid out a short line for his narrow gauge locomotive and a single car. The pseudo railway was named the Rattlesnake Creek Railroad and extended around his property which encompassed a Poway shopping area. Porter planned to operate it as a commercial entertainment. He died in 1980 without the venture coming to full fruition.

The City of Poway acquired the land from the Porter family in late 1986.

A group of volunteers met at the Hamburger Factory in February of 1991 and formed the Poway-Midland Railroad Volunteers, their prime purpose being to resurrect a railroad for the people of Poway.

In June of 1991, the City Council ratified the contract between the City and the Poway-Midland Railroad Volunteers, Inc. to restore, operate and maintain the railroad equipment and all of its facilities.

[Note: Frank Lorey is an accomplished railroad historian and a Charter Member of the PMRRV. In the late 1980’s and early 1990’s, Frank was Site Coordinator when the railroad was being built and also served the PMRRV in several capacities, including Vice President. In 1988, he spent 3 months researching material for this article and was mainly responsible for unearthing the true history of our steam locomotive.]

Tucked away amid other railroad relics in a shed in Poway, California, is a small construction-type locomotive with a once-clouded history. The old steam engine was built by the Baldwin Locomotive Works, and later rebuilt by a man who tried to create a new “history” for the locomotive. The rebuilding process was designed to make the locomotive appear to be almost 30 years older than its actual age. 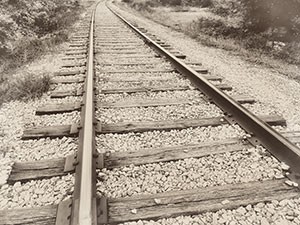 The engine was really completed in April, 1907, at the Baldwin factory in Philadelphia, Pa. It was originally an 0-4-0T saddle-tank configuration, of a common type designated as class 4-11C by Baldwin. They built 433 of these popular construction or small switcher-type locomotives between 1875 and 1925. The oil-fired engine had 9×14 cylinders, 28-inch driver wheels, and a large saddle-shaped water tank over the boiler as it was originally built. It operated on 42-inch gauge rails, a narrow-gauge variety commonly referred to in those days as “bastard gauge”. Boiler pressure was normally 150 pounds per square inch, and the engine weighed 24,400 pounds. It could develop 5,160 pounds of tractive force.

The locomotive was ordered by the Henry Cowell Lime and Cement Company for its subsidiary, the Cowell Portland Cement Company Railroad. Cowell ordered two identical engines to serve as numbers 3 and 4 on his small narrow-gauge line. Both were loaded on flatcars in Philadelphia and delivered to Port Chicago, near San Francisco, in May, 1907.

Cowell put the two locomotives to work hauling rock from the company’s quarry at Cowell, California, to the crushing mills three miles distant. The engines also had 1.5 miles of sidings and passing track to operate on. A few old Western side-dump wooden gondola cars were originally used to haul rock to the crushers. Eventually these were retired, and a total of 42 Kilbourn and Jacobs rocker-bottom steel cars, with six-ton capacity, took over the hauling chores.

The exceptionally heavy loads required the railroad to build to very high standards, including 50 to 65 pound rail, which was frequently used on main-line railroads in those days. Cowell also purchased two full-sized standard-gauge locomotives at the same time, as numbers 1 and 2, to run from the mills and cement plant outward. The railroad had regular main-line connections with the Sacramento Northern Railroad at Clyde, near Port Chicago, a distance of nine miles from the mills. This operation became known as the Bay Point and Clayton Rail Road.

The Cowell railroad kept its locomotives in top repair, operating two shops – one for the narrow-gauge engines, and another for the standard-gauge locomotives. In later years, two more narrow-gauge engines were added to the roster of the Cowell Portland Cement Company Railroad, one of which was another identical Baldwin-built 0-4-0T of class 4-11C. Apparently this type of locomotive served the heavy hauling chores very capably.

After 45 years of hard service, locomotive number 3 was auctioned in 1952 along with the other Cowell engines as the company’s fortunes declined. The famed locomotive dismantling firm, South San Francisco Scrap Metals Company, purchased numbers 3, 4, 5, and 6. Since very few engines ever made it out of this scrap yard in one piece, perhaps these smaller locomotives were used in the yard to push and pull many former steam-belching behemoths to their eventual doom. As time went on, the other engines may have sacrificed parts to keep the aging Number 3 running. In January 1960, the elderly locomotive was rescued by Charles B. Pollard of Vista, Ca. He brought it to Pollard’s Machine and Manufacturing shop on old Mercantile Street in Vista, and in 1962 he started a major rebuilding and facelift project on the engine that took a year to complete. He also clouded the history of the engine by removing all identifying markings such as the builder’s plates and the railroad number plate. Pollard invented a story that the locomotive was purchased from a logging railroad in the Pacific Northwest where it had been rusting away in a back-woods lumber camp. This popular story even appeared in the book “A History of Vista”. Pollard’s shop was designated as the “P&H Locomotive Works” for the rebuilding effort.

Pollard apparently had an affinity for the 1870′s, as he removed the saddle tank, light, smokestack top, and bell while trying to make old Number 3 fit the role of a small locomotive built in 1878. He had new builder’s plates cast, giving the 1878 date, and a false serial number of 0491. Unfortunately for his story, Baldwin’s serial numbers for that year ran between 4273 and 4564. The railroad number plate was changed to read “2″. There were several logging railroads in Oregon, Washington, and Northern California that had similar locomotives running in the late 1870′s and early 1880′s, so Pollard’s story almost held, except for the bogus serial number.

The locomotive ran on several hundred feet of track next to Pollard’s shop in Vista. His railroad claimed to be “the shortest railroad in California”. To run with the engine, a tender and passenger coach were constructed in 1870′s style. The railroad was called the “P&H Short Line”, and the locomotive was named the “Robert E. Lee”. Plans were made to add a second coach, but Pollard’s death in 1966 ended any expansion hopes.

The estate of Charles B. Pollard immediately put the whole railroad up for sale, and in May 1966 John S. Porter of Poway purchased the engine, tender, passenger car, tracks, and other odds and ends. The new home for the locomotive was off Midland Road in Poway, next to the Porters’ home. Tracks were expanded to include a trestle over Rattlesnake Creek, and the railroad took on a new name – the Poway Village and Rattlesnake Creek Railroad.

Whether Porter ever knew that his locomotive was not really built in 1878 is unknown. He had tourist postcards printed giving the 1878 date for the locomotive, most likely relying on information from the Pollard estate. He was proud of his “new” engine, and repainted the “P&H” logo to read “P&R Short Line”. Porter was quite a collector of railroad items, and he built a small station house and storage shed for the train. A standard-gauge caboose was acquired from the Southern Pacific for stationary display.

The caboose was built in 1937, and retired after a 1964 crash. Other railroad cars were loaned to Porter for display at the Poway Village amusement park, and he added railroad speeder cars, wooden gondola cars, and a small flat car to the collection. Porter’s death idled the railroad in 1980, and the locomotive sat in the storage shed. After extensive negotiations, the City of Poway acquired the property, including the railroad and locomotive, in December of 1987. In February of 1988 the city announced plans for the train’s restoration, hoping to have it operating again in a few years, this time on greatly expanded tracks. . . .

[And the rest, as they say, is history. For information on the locomotive’s more recent history, go to the Equipment Roster page.]

A three-month historical search resulted in this history of the locomotive. New builder’s plates have been restored to the sides of the boiler, after detailed examinations revealed the engine to be slightly different from its sister locomotives Numbers 4 and 6. Old Number 3 had one fewer rivet in a row on the cab, and a slightly different smokestack flange, which clearly established its true identity. The builder’s plates now read “Baldwin Locomotive Works, number 30646, April 1907, Philadelphia, U.S.A.”, the original wording on the plates.